The gurus are hyping the Iranian rial now that the sanctions have been lifted, claiming that it will skyrocket in value just like the dinar.  Problem is the dinar hasn’t skyrocketed

in value and never will, so why should we expect the rial to?  In reality the lifting of the sanctions will in fact open Iran’s markets to the world, and should create an emerging economy.  And one thing that we’ve learned from studying emerging economies like Vietnam is that they prefer to slowly lower the value of their currency rather than raise it.  This makes trading with them more attractive, which helps them to build their exports.

In researching for this post I came across a site that is “reporting news” about the rial, but it sounds more like it’s pumping the rial.  Here’s an excerpt.

KARACHI: The Iranian rial has surged in value after the lifting of international sanctions against Tehran, with speculators and investors hoping that the currency could turn returns like the Kuwaiti dinar did in the early 1990s after that country regained independence from Iraq.

Currency dealers said that the value of 10 million Iranian rials has jumped from Rs32,000 before the lifting of sanctions to Rs50,000 now.

Iraq captured Kuwait in 1990 which eroded the value of the Kuwaiti dinar. During the subsequent two to three years the currency incurred loss to its holders, but those who were patient and chose to hold it were lucky. In Karachi, many made fortunes as the dinar later shot up more than hundred times in value.

“Investing in the Iranian rial is not a bad idea,” said a currency dealer.

Actually, it kinda is.  I’m afraid that this is the kind of talk we’ll be hearing from currency dealers and their shills in the coming months, but bear in mind all of the hype about the dinar and the current reality.  It was worth more seven years ago than it is today.

In the chart below you can see that the value of the rial actually dropped after the sanctions were lifted in mid-January.  This may seem counterintuitive, but this is the norm, folks. 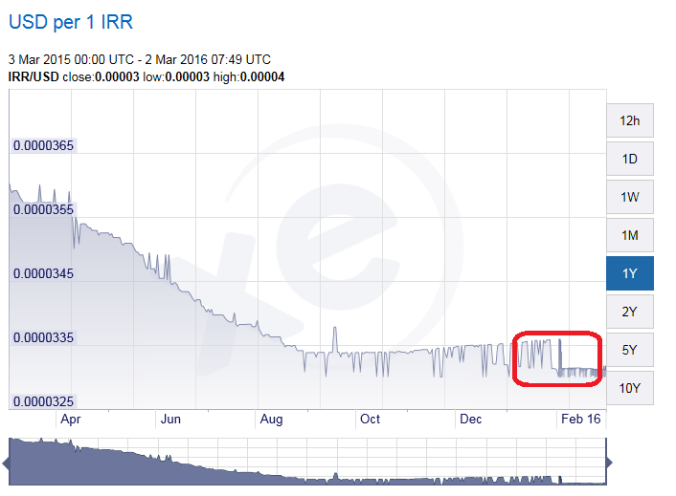 The following was taken from an article in Al-Monitor, an English Arab news site.

The Central Bank of Iran (CBI) has in the past 18 months focused on curbing inflation, which is an effective factor on the rial’s parity rate against the US dollar as the dominant reserve currency. Inflation, which once stood at 40%, reached 15.5% in the 12 months ending April 20, a great achievement for the moderate administration that took power with an agenda to recover the economy. Late in April, the regulator eventually decided to lower interest rates, putting a 20% cap for deposit rates (down from 22%) and 24% limit for lending rates (down from 28%). Observers believe the third step the CBI may take is a decision to unify the dual foreign exchange rates, a policy the administration has been sitting on since mid-2013.

Some economists believe a unified system could be a boon for Iran’s business environment, as it would reduce corruption and rent-seeking, a phenomenon widely believed to be a major setback for the struggling economy. In April, Tahmasb Mazaheri, a former CBI governor, told Nasim Online that the administration “should not waste time by putting off the unification plan for the post-sanctions era.” Sohrab Delangiz, another monetary expert, also believes the dual-rate system gives “wrong signals” to investors. The rial’s value, he argues, should approach a more “realistic” level — possibly around 37,000 rials against the US dollar or as others suggest around 52,000 rials, taking into account the 50% inflation rate collectively registered in Iran and the Organization for Economic Cooperation and Development over the past two years.

Currently the rial is valued at 30,202 rials to the dollar or $.00003.  At 37,000 to the dollar it would be about $.000027, and at 52,000 to the dollar it would be about $.000019.  As you can see, the prognosis is for a lower value as Iran goes forward, not a higher value.  Buying something that is more likely to go down in value than up is a bad idea.  What makes it a really bad idea is that Iran announced in 2011 that they are planning on removing three zeros from their currency.  Sound familiar?  That’s redenomination talk.  As in lop.  As in what many countries like Iran do to remove the effects of past hyperinflation.  As in the currency reform plan for the Iraqi dinar that has also failed to materialize and that gurus misrepresented as a revaluation.  If you “invest” in the rial and they redenominate you’ll have to try to find some place to exchange your rials into the new rials or back into USD.  Either way it won’t be for free, so you’ll be further in the hole than you were to begin with.

Whether they get around to enacting their planned redenomination or not, the Iranian rial is a sucker’s bet.  Don’t fall for it.