I haven’t said much about Stryker lately, and there are a couple of reasons for that.  First, maybe I’m wrong but I think the guy actually believes everything he says so I’m less inclined to put him in the same category as the others.  And second, the absolute stupidity and crapola spewed out by other gurus has kept me preoccupied.  Eagle1 was a good example.  However, the other day Stryker did a five minute pumping riff that would have made TNT Tony proud.

After saying some admirable things like “the dinar is not your saviour”, Stryker went into high gear pumpocity in one of his daily broadcasts.  Starting at 7:30 in he says that he knows financial people and economists with PhD’s who say that his group is doing some of the best news coverage out there, and that a substantial revaluation is possible.  As I’ve stated before, no respectable economist, financial adviser, or currency expert is going to endorse the dinar investment, so it comes as little surprise to me that Stryker’s people are unnamed.  On the other hand,this blog has named several experts who have referred to it as a scam.  In fact I have interviewed one of these experts by the name of John Jagerson on two occasions.  I would like to challenge Stryker to produce similar experts along with their names and credentials to supports his position.

He goes on to say that 75-85% of their money supply is US dollars and the financials are all “in the value”, meaning (I think … Stryker is very hard to follow when he’s talking numbers) that their money supply is only 15-25% IQD for all we know.  What he doesn’t mention is that the money supply figures on the CBI financial page are listed in …. DEEE – NARS!!! 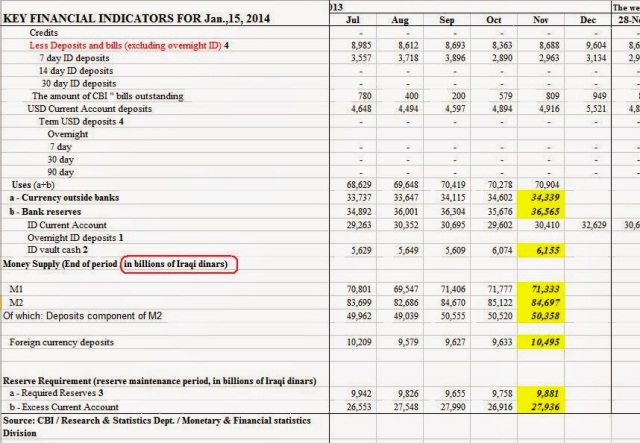 How much clearer do they need to be?  The reason the value of the IQD has been under a tenth of a penny for over a decade is the fact that there are trillions of them in circulation that are backed by less than $100 billion in foreign currency reserves.

Stryker then follows that up with the claim that the CBI isn’t going to tell us what they’re going to do.  HUH???  They’ve been telling us for years that their policy is a stable exchange rate and they’ve kept it extremely stable for five years now.  They’ve been telling us for over three years that they intend to redenominate, removing three zeros and replacing the old currency with a new one at an exchange ratio of 1000:1 old for new.  What does he mean they’re not going to tell us?  The problem isn’t lack of disclosure here.  The problem is RV believers don’t want to listen.

After that he says that there’s no transparency in Iraq.  Well the IQD happens to be on an IMF program that demands transparency, and periodic audits to ensure such.  That’s what is meant by “program rate”.  It’s not an artificial rate that only applies until they release the true value as some gurus suggest.  It’s more like probation because Iraq is so corrupt and volatile and can’t be trusted.

After that Stryker goes into Breitling mode, saying that they’re putting USD into the market to keep the dinar’s value down.  The fact is USD have been in the market since the IQD was introduced.  Early on (before the new CBI was established and started managing the money supply) the IQD’s value spiked and the decision was made to withdraw some USD from circulation and replace them with IQD in order to prevent further appreciation. It’s called  supply and demand.  So how does Stryker conclude that putting USD into the market would lead to a lower value for the IQD if pulling USD from the market accomplishes the same thing?

A few days later Stryker crossed over into conspiracy nut territory, spending half of his show talking about a “real letter” from a “real attorney” named A. Clifton “Al” Hodges about global settlements.  What he didn’t tell his viewers is that Al Hodges is a “real crackpot”.  Don’t believe me?  Type “Al Hodges” and “Nesara” into Google and look at the results.  Or try “Al Hodges” and “CMKX”.  Or just read through the tinfoil hat nonsense of this lunatic in the letter Stryker was talking about.

You might also want to check out this article from the New York Times.

Or maybe look over this rambling manifesto about the cabal on a page that includes Mr. Hodges’ photo which Stryker was using on his broadcast.

Or you can check out the thoughts of citybear59 on this CMKX board.

Back to what I said earlier about Stryker believing everything he says.  Stryke that.  Why would anybody with any sense buy into this rubbish?