Last week I posted about LD Holdings (LDHL), an Over the Counter stock being pumped by dinar guru Breitling and the BH Group.  The pumping took it all the way up to $1.50 or so on Monday before the inevitable plunge to below $1 on Tuesday.  Currently it’s about $1.15.

I’ve stated before that many dinar investors have never invested in anything, let alone currency.  Well the same could be said for penny stocks.  They’re inexperienced and somewhat naive about the dangers of the world of OTC stocks.  This is a market that is less strict and less regulated and therefore vulnerable to manipulation from scammers.

A guy with a following can say “hey, I’m buying XYZ stock because it’s gonna explode!  You should too!”  Before long people who don’t know better start buying and the stock goes up simply because of the unusual volume from the victims of the hype, who then see the stock going up and say “WOW!  He was right!  It’s going up!”  Yeah, it’s going up because the people who listened to the guy and started buying drove it up.  Then when he and his accomplices sell the stock tanks and the naive investors end up with a loss.  This scenario plays out constantly with penny stocks.  For more info watch this video on “Anatomy of a Pump and Dump”.

But a sudden price drop isn’t the only risk.  Even if the price goes up the penny stock investor doesn’t have the assurance of liquidity that one does on NASDAQ or NYSE.  A stock might be showing a current value of $1.00 but the investor who decides to sell might have to take $.50 or less.  It’s a lot like WARKA for the dinar investor.  Sure, your interest rate looks good on the computer screen, but what good does that do you if you can’t withdraw your funds?

Well apparently I’m not alone in my opinion about LDHL.  I found a site called Aim High Profits where they analyze microcap and nanocap stocks.  They wrote an article the other day that I think everybody interested in LDHL should read.  Also, if you or anyone you know is invested or thinking about investing in this company you should have an investment advisor look it over and offer their assessment.

Before you read the article I have something to show you.  A document has been brought to my attention that I think adds a lot of context to what is going on with LDHL. It’s a contract between the owner of Financial Wellness LLC and LD Holdings. 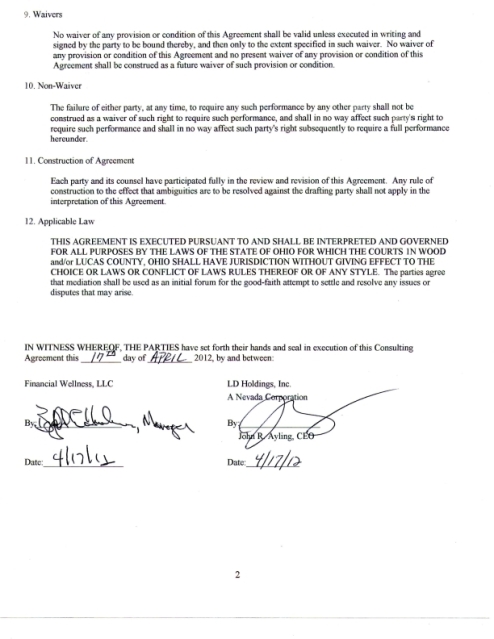 Is it just me, or do the initials of the manager of Financial Wellness look like BH as in Brad Huebner?  You can review the consulting agreement document here.

The 2003 capture of Saddam Hussein was “a moment in history” that subsequently opened the door for a decade long scheme of investing in defunct, non-existent currency. The penny stock of LD Holdings Inc. (LDHL), focused on Baby Boomers, saw an incredible surge Friday, as high as $1.03, creating an intraday gain of over 98%. However, looking deeper into the SEC filings of the once swimming pool service company, turned restaurateurs, turned financial advisors, some insiders had paper gains of 3,333% on LDHL stock as of Friday’s high.