Early on in the life of this blog I conducted interviews with members of the dinar community. My purpose in doing this frankly was to provide content for the search engines (which apparently worked), but it was also to provide examples to the dinar community of people who had stories to tell about how their views on the dinar had evolved since they first invested. One interview that I conducted was with a dinar forum owner known affectionately as Chuckles.

Chuckles was kicked out of several dinar forums for “being a troublemaker”, so he started his own forum where people were free to discuss the dinar from all viewpoints. Nobody was banned for being negative or a “lopper”. There were no ads and no paid membership or post-RV programs. He paid the monthly expenses out of his own pocket just because he wanted to provide an environment that was needed.

For the first few months there wasn’t much traffic to his forum, but when a mod revolt occurred at Dinar Vets a couple thousand people found their way over to his Dinar Dater site.  (“Dater” was his tongue in cheek reference to the “RV Monday” BS from dinar gurus who are perpetually setting dates and rates, but when the site became well known some of the other forum owners started ignorantly referring to it as a dating site.)  The site became a popular location for some well known people in the dinar community, and because of that Chuckles was able to find some of the answers that he had been looking for about this “investment”.  In time he sold off his dinar and denounced it as a scam.  The forum closed down in late 2012.

Chuckles took his name from his love of comedy and his incredible sense of humour.  He loved to make people laugh, and even mentioned his wish to try his hand at doing standup.  The photo below is one he provided for me when I posted my interview with him. 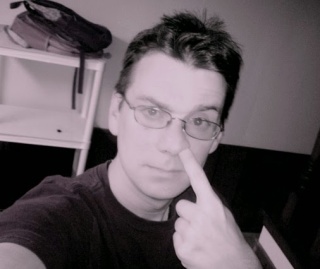 In that interview Chuckles said that he learned about the dinar from his father who was approached by a member of the BH Group.  They sold him on the possibility of a huge payout and like many of us who have since learned better he quickly bought a few million, thinking that he didn’t have time to do sufficient research.  When he told Chuckles about the dinar he also bought a few million “just in case”, but he was always trying to figure out just how Iraq was going to pull this off.  That set him on a quest for the facts, and that quest eventually led him to this blog.  He was then able to direct his father to accurate information and his dad sold off his dinar.  Shortly after that his dad’s acquaintances in the BH Group were indicted, and he expressed his gratitude to Chuckles for getting him out of this scam.

Tragically, we lost Chuckles in July to a medical condition that had plagued him for some time.  He leaves behind a wife and daughter along with many friends from his days of playing in bands and his years of working in IT.  He also leaves behind a thankful dinar crowd whom he welcomed into his forum at no expense to them and with no pressure to conform.  He will be missed.